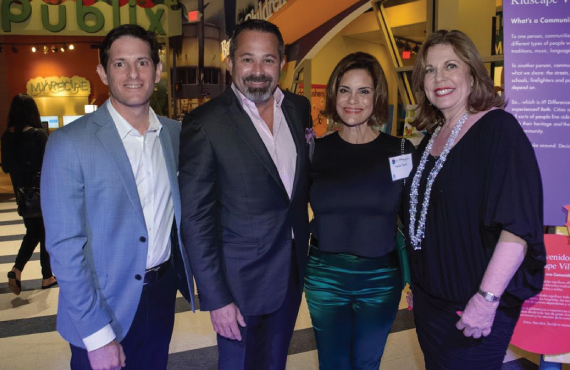 On Saturday, March 16, at Soho Studios in the arts district of Wynwood, Miami Children’s Museum delighted 600 attendees to its Annual Be A Kid Again Gala “Color Your Imagination,” a world of unique and fascinating colorful dreams! $1 million was raised to support educational programming with the help of generous donors, sponsors and extensive silent auction. This year’s gala was chaired by Heide & Jose Dans with the auction chaired by Melissa Netkin and Annie & Jordan Trachtenberg as After Party Chairs.

Guests felt like a kid again from the moment they entered Soho Studios. The night kicked off with a not to be missed cocktail reception filled with an extensive silent auction with unique pieces including an autographed guitar by Grammy Award Winner, Shakira, Rolling Stone Concert Tickets, a first-class Napa Valley getaway, Gucci tote bag donated by Neiman Marcus Bal Harbour and so much more! Adding the spice to our colorful themed extravaganza was a taste tempting array of treats provided by Chef David Schwadron Catering and Event Design with a twist that brought to life all the iconic visions of fantasy and fun. Julie Durda, Local 10 meteorologist, joined Chef David for an incredible live chef demonstration that filled the room with delicious aromas.

And then there was the most playful Gala After Party of the season: “Play After Dark”!  Chaired by Annie & Jordan Trachtenberg and hosted by Playmakers, the Museum’s Young Professionals support group, Miami’s most influential emerging professionals joined Gala goers and together the party boogied late into the night.  Attendees were treated to open bars, light bites and sweets catered by Chef David Schwadron Cuisine & Event Design. Guests were transported to a rainbow of excitement for a night of celebration!  Sponsors for the After Party include Flagler Strategy Group LLC, &gallery; Trachtenberg Architecture, Design and Development; Shutts & Bowen LLP, Kelly and Chris Melchiondo; John Arrien; Brittany A. Sharpton; 13th Floor Investments; Toshiba Business Solutions, Duffy’s Foundation and Wells Fargo.

Miami Children’s Museum offers bilingual and interactive exhibits, programs, classes and learning materials related to arts, culture, community and communication.  The Museum has 16 interactive galleries as well as housing many exciting and fun traveling exhibits.  The Museum is dedicated to enriching the lives of all children by fostering a love of learning through play and enabling children to realize their highest potential. Through arts and educational programs, the Museum seeks to include and target all audiences in Miami’s changing and diverse community by becoming the “town center” for Miami-Dade County’s children and families.’