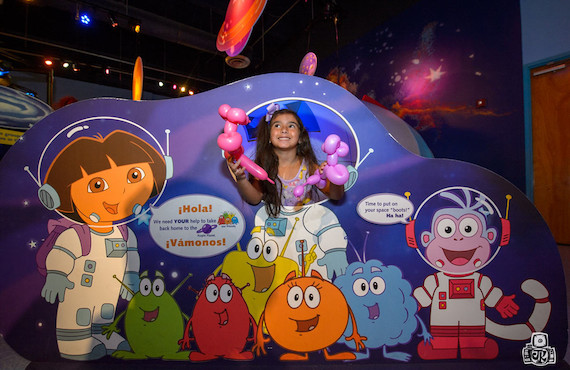 Get ready to explore with Dora and Diego at Miami Children’s Museum (MCM) in the new exhibit “Dora and Diego—Let’s Explore!” The exhibit features beloved characters Dora and Diego from Nickelodeon’s hit preschool series Dora the Explorer and Go, Diego, Go!, along with their friends Boots, Map, Backpack, Isa, Tico, and of course Swiper, now in their own exhibit for children to explore as they learn and play along.

This new, interactive traveling exhibit, created by The Children’s Museum of Indianapolis in partnership with Nickelodeon, will open at MCM’s Watson Island location Sunday, October 5, 2014 and run through Sunday, January 11, 2015. Be sure to bring your little explorer to play along with Dora, Diego and their friends so they too can say “We did it!”

Dora the Explorer follows the adventures of the 7-year-old Latina heroine Dora and her friends in an imaginative, tropical world. Go, Diego, Go! stars Dora’s 8-year-old cousin Diego, a bilingual animal rescuer who protects animals and their environment. The exhibit gives children and their families the opportunity to go into the worlds of Dora and Diego to engage in problem-solving and active play. Young children play along as they join an adventure and learn how to solve problems, be a good friend, and care for animals and the environment. Spanish vocabulary is incorporated throughout the exhibit to introduce Spanish-speaking skills to preschool children.

Dora the Explorer is a ground-breaking children’s series that draws kids into an interactive quest using a variety of learning techniques in every episode. Dora and Diego—Let’s Explore! carries the play-along theme throughout the exhibit as children are encouraged to actively play while they solve problems, share and learn about the natural world.

Favorite friends and places from episodes of Dora the Explorer and Go, Diego, Do! are incorporated in the exhibit including:

Rocket Ship
Dora’s outer-space friends want to go back to the Purple Planet and need help getting there. Aboard the Rocket Ship, preschoolers are invited to put on a spacesuit, pilot the ship, and test their memory with images of colorful planets as they help Dora and Boots take their outer-space friends home.

Constellations
On the way to the Purple Planet, Dora and Boots encounter some interesting star groupings. Children and their families are invited to help identify the patterns made out of stars by inserting star shapes to light-up a constellation.

Isa’s Flowery Garden
Dora’s friend Isa the Iguana demonstrates how to take care of flowers, plants, and animals. Preschool visitors can tour Isa’s Garden to pickflowers, interact with bird, butterfly, and insect puppets, and pretend-fly with toddler-sized bird and butterfly wings. Even the littlest visitors will enjoy smelling the flowery scents and picking soft-fabric posies.

Tico’s Tree and Car
Dora is a good friend to Tico the squirrel and young visitors are invited to be a good friend to Tico too. Tico needs help picking nuts from the tree for a family picnic. Children can play along with Swiper to swipe the nuts and watch as they shoot up and over to fill Tico’s basket. Tico’s car is in need of fuel! Visitors can help Tico fill up his car with nuts so he can begin his journey.

Animal Rescue Center
Young children can practice caring and helping rainforest animals in Diego’s Animal Rescue Center. Preschoolers can be an animal rescuer, like Diego, as they diagnose and address an animal’s problem from the ‘Scanner’ bed, bandage and apply cold packs at the ‘First-Aid Station,’ and bathe stuffed animals at the ‘Care Station.’

Rainforest Maze
Preschoolers will explore a rainforest to locate rainforestanimals. Active play is encouraged as children swing across the Bobo Brothers’ monkey bars, crawl through a fallen tree, climb across Jaguar Mountain, and jump or hop across the River Rocks.

The exhibit is funded in part by a grant from the Amerigroup Foundation. The Amerigroup Foundation’s support of Dora and Diego — Let’s Explore! provides underwriting for preschool field trips to the museum for youth populations identified as most at risk for childhood obesity. Information about healthy, active lifestyles is available to parents via the exhibit’s Family Guide and website, and free school curriculum is available to teachers as well.

Dora and Diego — Let’s Explore! is a marvelous adventure of self-discovery for the whole family, only at Miami Children’s Museum, 980 MacArthur Causeway on Watson Island in Miami, from Sunday, October 5, 2014 – Sunday, January 11, 2015 / 10AM to 6PM daily.  Entrance to the exhibit is included in each regular admission to the Museum.  Admission is $18 for adults and children, $14 for Florida Residents, free for children less than 1 year and admission for Members is complimentary.  For more information contact the Museum at 305.373.KIDS (5437) or visit www.miamichildrensmuseum.org.