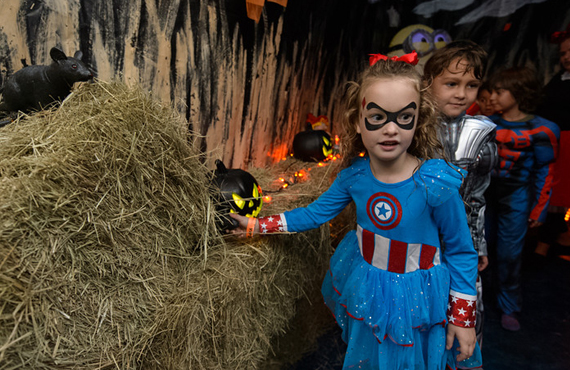 All the little ghosts and goblins along with their families were treated to a boo-tiful time at Miami Children’s Museum’s “Not So Scary Family Halloween Bash!” on Sunday, October 15th. The event raised $100,000, which will directly support the Museum’s educational programming and the Very Important Potential Program which provides free admission, scholarships, events and programs for children living in Miami’s under-served communities.

Considered one of Miami’s best Family Halloween events, costumed trick-or-treaters made their candy collecting way around the Museum’s galleries. Families had a bewitching time creating miniature pumpkin and sugar skulls, face painting, dancing the Monster Mash and eating delectable treats. This year, the Museum also added a new toddler area including a variety of sensory bins featuring pumpkin guts and fake spider webs, spooky story time and a haunted music play led by the Museum’s Theater Troupe. Guests also enjoyed Miami’s best family friendly haunted house. This 2,500 square foot Haunted House can be as scary as you want it to be, but what makes this one special is its unique collection of zombies, ghosts and haunting music and sounds.

Miami Children’s Museum offers bilingual and interactive exhibits; programs and classes and learning materials related to arts, culture, community and communication.  The Museum offers 14 interactive galleries as well as many exciting and fun traveling exhibits.  Miami Children’s Museum is dedicated to enriching the lives of all children by fostering a love of learning through play and enabling children to realize their highest potential. Through arts and educational programs, the Museum seeks to include and target all audiences in Miami’s changing and diverse community by becoming the “town center” for Miami-Dade County’s children and families.