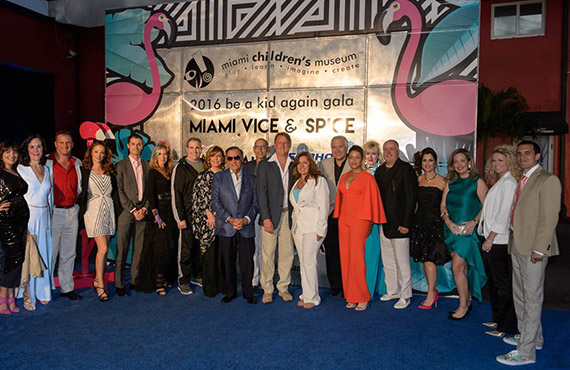 Considered by many to be the most unique and playful event of the South Florida social season, Miami Children’s Museum’s Be A Kid Again Gala features exceptional live entertainment, luxurious auctions and a culinary experience unlike any other. This year’s gala, chaired by Michael and Paula Fay, will be held on Saturday, February 27th at 6:30 PM at Soho Studios located at 2136 NW 1st Ave in the arts district of Wynwood. Miami Children’s Museum will take you to “Miami Vice & Spice,” a world of fast cars, fast boats, exotic cuisine and the pastel streets of Miami and Miami Beach with Crockett and Tubbs! The event will honor community leader Merrett R. Stierheim who for the past five decades, has been a visionary in so many roles for Miami-Dade County. The gala will also showcase a one of a kind live auction. All funds raised for the event will directly support the Museum’s educational programs.

Guests will explore the night with a performance by “Party on the Moon,” considered the world’s greatest party band, that will have them heating up the dance floor. This year’s event will also feature a unique theme based on the landmark TV series Miami Vice, showcasing the very best of Miami and the 1980’s.

Premier Sponsors for the event are Dr. Brigitt Rok Potamkin and Mr. Alan Potamkin and the Fairholme Foundation and presenting sponsors include Jeff and Yolanda Berkowitz, Northern Trust Bank and the Miami Marlins.  We are excited to be honoring Merrett Stierheim for his service and dedication to all of us in Miami-Dade County,” says Jeffrey Berkowitz, Chairman of the Board for Miami Children’s Museum. “Additionally the funds raised at the Be A Kid Again Gala help us provide exceptional educational programming to children and families throughout South Florida. We are dedicated to ensuring that all children continue to have access to these programs.”

Guests will feel like a kid again from the moment they enter Soho Studios. The night kicks off with a not to be missed cocktail reception filled with an extensive silent auction with unique pieces.  The main event of the evening is an energetic live auction featuring spectacular items. Included among these items are: a Miami Heat Experience that includes tickets and a chance to attend pre-game and post-game action in the TV Studio; a 4 night, 5 day stay at a private home in exclusive Ocean Reef; an Epic Hotel Presidential Suite Package; and much more. Value of the items: Priceless. The live auction will be followed by an exciting musical performance by the world’s greatest party band, “Party on the Moon”. And adding the Spice to our “Miami Vice & Spice” themed extravaganza is a taste tempting array of treats provided by Chef David Schwadron Catering and Event Design with a Miami Vice twist, that bring to life all the iconic visions of this landmark television legend. But then there’s the After Party!

Miami Children’s Museum (MCM) invites you to attend our 4th annual Gala After Party, “Play After Dark,”10:30PM at Soho Studios. Chaired by Adam Haas and Laura Juncadella, Miami’s most influential emerging professionals will join gala goers and together the party will boogie into the night featuring popular Freestyle Dance singer Debbie Deb and DJ Zog along with DJ’s and a premium bar with late night treats. Sponsors for the After Party include 3 Pillars, Gold Coast Beverage Distributors, and Roho Kitchen. For sponsorship and ticket information for the 2016 Be a Kid Again Gala “Miami Vice & Spice” contact:Hannah Hausman at hhausman@miamichildrensmuseum.org or call 305.373.KIDS (5437) ext. 142 Tickets for the 2016 Be A Kid Again Gala are $500 per person and ticket packages are available online. Please visit www.miamichildrensmuseum.org/gala.